In my efforts to move us away from processed foods (not completely, just where manageable and where feasible) I've been wanting to find a good homemade granola bar recipe. I've tried a few but haven't been wowed by any. And of course I wanted a chewy one - always with the chewy. So I knew I wanted chewy and I always want easy. I also thought that some peanut butter as a bit of added protein and sustenance would be a nice touch, so when I saw this recipe over at Culinary in the Country, it seemed to fit the bill perfectly. 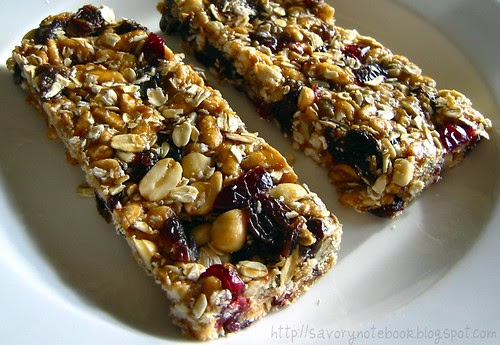 These bars are originally from Eating Well, but Joe put his own spin on things by using brown rice cereal in place of Rice Krispies, using a variety of dried fruits rather than just raisins and by subbing in brown rice syrup and golden syrup in place of corn syrup. I pretty much followed Joe's recipe but also made a couple of changes - I used yet a different combo of dried fruits and I used puffed brown rice cereal (I didn't see any crisp at the store), and I used a combo of golden syrup and corn syrup. Corn syrup is what I happened to have on hand but once that's gone I will likely switch to a combo of golden syrup (it has such great flavor) and honey - I'd like to try the brown rice syrup, but I'm thinking that honey will turn out to be more economical. For a flavor boost, I toasted the oats at 350º for 5-8 minutes or just until the oats began to brown and become fragrant.

These are fantastic. Easy to make and so nicely chewy. I was pleased with how the puffed brown rice worked in these and am thinking the puffed Kashi cereal would work well here. I think I'll add the wheat germ back in next time too. I wrapped each bar individually and kept them in the freezer - that way we could just grab them and go and I didn't have to worry about how long they would keep. I've begun experimenting with other combinations and once I have some nailed down, I will be sure to post them here.
Posted by Alysha at 9:14 PM