The Drunken Cheesy Bread only used up part of my stale-bread-in-the-freezer supply. The rest went to make this easy soup - Pappa al Pomodoro - from Rachael Ray. According to many sources, including this article in the NYT by Mark Bittman, the name of this soup translates loosely to "tomato mush". Hmmm, maybe sometimes it's better not to translate things into English. Most recipes I found included tomatoes, bread, olive oil and basil as the core ingredients. 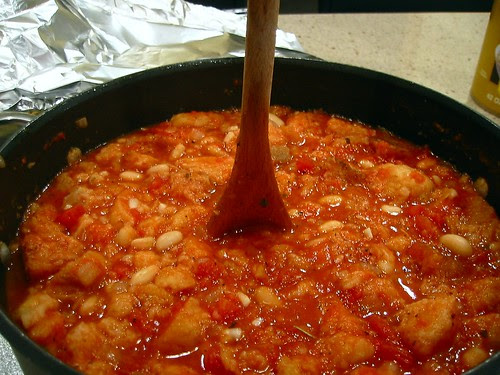 Rachael says that the soup is thick enough when
your spoon will stand up in the pot.

In her cookbook, 365: No Repeats, she explains that she got this particular recipe from a gentleman in Italy who INSISTS that if you're going to make this soup, you MUST make it exactly as written - including the chopped raw onion and the drizzle of olive oil at the end to finish it off. Only the basil is optional. Not wanting to disrespect the originator of this recipe, I did follow the instructions to the "T", only leaving out the optional basil since it's no longer in season. This soup would be a great end-of-summer soup when the garden is loaded with tomatoes and basil, but my basil is long gone and I try not to shell out any money for those pitiful little fresh herb packs at the grocery store, so I skipped it. 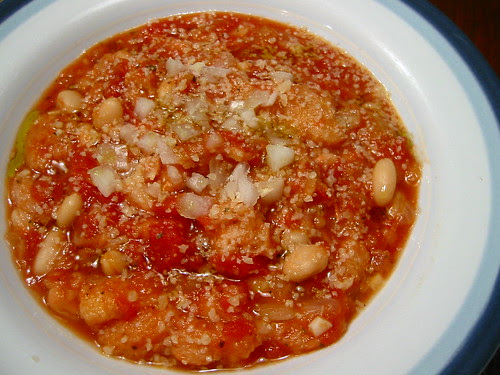 Certainly it would have been wonderful with the basil, but it was delicious without. I was a little skeptical about the raw onion garnish but we all agreed that the onions did add something, as did the drizzle of EVOO. Easy to make, very hearty and very satisfying. Rachael claims this recipe makes 4 servings but we got at least 6 large servings, maybe more.

Now that I've tried it as instructed, I'll feel free to add a few dried herbs in the winter months to add a little herbal zing. Wegmans makes a rosemary olive oil sourdough that would be REALLY good in this soup.
Posted by Alysha at 9:31 PM