Really, that's all you need for a terrific meal: bread, cheese and wine. Here's a supremely simple dish that combines all three into one deliciously satisfying meal.

I don't know about you, but I am always tossing leftover hunks of bread into the freezer thinking that I'll find a use for them later. More often than not, I end up throwing them out when they start to look too dried out and freezer burned. While cleaning out the freezer the other day, I found yet another bag of neglected bread pieces - nice chunks of crusty sourdough - and decided I was going to use them, darn it. I ended up using half for this recipe and half for an Italian bread soup from Rachael Ray that I will share with you later. 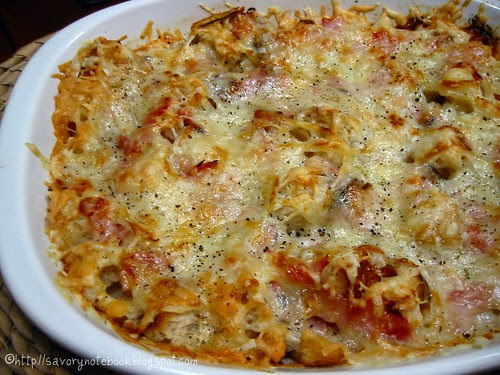 Drunken Cheesy Bread
I started with a shallow 11 x 7-inch casserole dish and laid the bread cubes in a single layer (a slightly crowded single layer, but I tried to squish them all in there). Next comes a bit of thinly sliced onion - be sure to slice as thinly as possible as the onion does not get sauteed first - and ham (I used some sliced deli ham that we happened to have on hand). Unlike egg-based stratas or bread puddings, this one does not require an overnight soak - you just pour the wine over the bread mixture and you're good to go. I used one of those little 4-pack bottles of white wine which are just shy of 1 cup - these little bottles are great to keep on hand for cooking. The dish is topped off with 6 ounces of shredded cheese - I used Fontina and Asiago. Super simple - the hardest part is shredding the cheese.

Mmmmm....was this good. We got 4 servings out of this, just barely. It looks like a large amount of food when you're dishing it out, but since it is not dense with egg, it actually ends up being fairly light and I wouldn't have minded a bit more or at least some leftovers. Next time I'll increase the quantities and make a 9 x 13-inch pan. I was happy to see that the onions - if you slice them thinly - bake up quite nicely so sauteeing them first truly is not necessary. My first thought was that a bit of proscuitto would be really nice in this dish and of course, just about any variety of cheeses would do well - the type of dish that you can mold to whatever you have on hand.

A big thanks to Elisabeth over at the CLBB for bringing this recipe to light! I see various incarnations of this dish becoming part of our regular rotation.......so many possibilities and potential combinations.........
Posted by Alysha at 8:01 AM