Getting back to it with a fruit tart!

I can't believe that I let three weeks past since my last post! I thought that with me not cooking any new recipes during the remodel that I'd get a lot of posting done. Obviously THAT didn't happen. Partly I was busy painting and then just too tired and partly I was too preoccupied to sit down and write a post.

It's been a long 2 1/2 weeks and we had a fumble or two along the way, but things have gone pretty well overall.

It's almost done. I finally got all my appliances back in on Friday and at the 11th hour, the plumber came out and hooked up my dishwasher at Friday night. And good thing too - we had 8 overnight guests stay over last night. Not only did we have overnight guests, but it was also my son's birthday - he turned 11 yesterday. My youngest is 11! Eek!

I spent most of the Friday scrubbing appliances and making sure everything was clean as it came into the kitchen, cleaning out my dining room which had been serving as a prep area/mini kitchen and loading the essentials back into the cabinets. There is still a lot of stuff to move up from the basement, but I'm taking my time and taking this opportunity to arrange things more efficiently.

Yesterday was spent actually COOKING in my new kitchen. So far I love how much more efficient it really is. But more on the kitchen later. We are still waiting for the pendant lights to go in, outlets on the island, a transition strip on the floor, some ceiling paint and a few other odds and ends. Once that's all done, I'll post some pictures.

Since we had JUST gotten our kitchen back into working order, I kept it pretty simple for our guests......hamburgers, hotdogs and brats along with gazpacho and a green bean salad. (Both of those dishes were designed to use up beans and cucumbers from the garden. More on the garden later too!) We topped off dinner with my son's birthday dessert request - a dessert pizza/fruit tart. 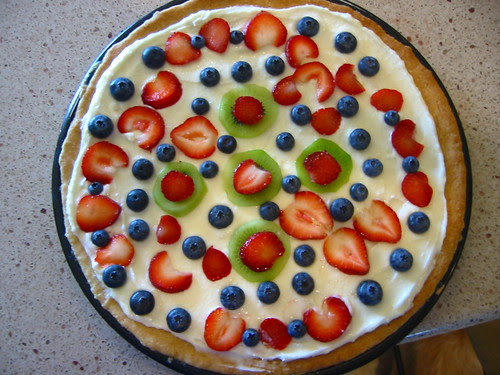 My son had fun decorating his own tart.

This recipe starts with - gasp - a sugar cookie mix to form the crust. I keep saying that some day I'll figure out the proportions needed and make my own sugar cookie dough (I do have a good recipe, but it's much more than I need for one pizza), but with everything going on this week, it was definitely easier to just follow the recipe as it was written. And I have to admit, even with the mix it turns out quite well. 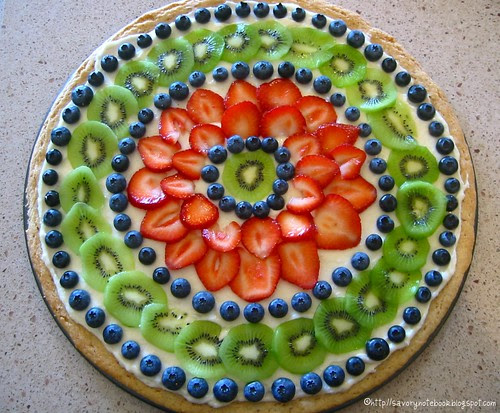 The recipe calls for adding finely chopped almonds to the cookie batter - the almonds add a really nice element of interest to the crust. The dough is spread out on a pizza pan and baked in the oven until lightly golden. You top the crust with a mixture of cream cheese and powdered sugar and then finish it off with fresh fruit and let it chill. Very easy. The hardest part is decorating it - it takes some time to arrange all those little blueberries - but it's also a lot of fun! 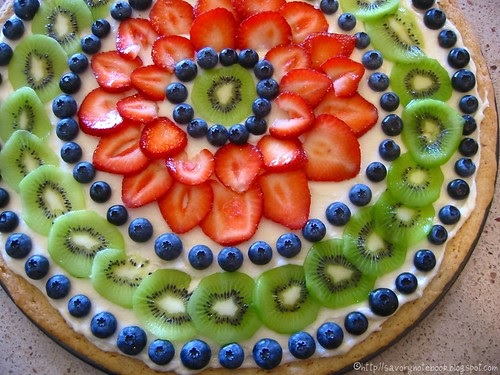 Since we had 12 people I made two tarts. I invited DS to decorate one on his own and I took over the other. We now have only one piece left, so I think it was a hit. It really is a fun summer dessert - it's not hard to make and yet it makes a very pretty presentation and I don't think I've run into anyone who didn't enjoy eating it too.
Posted by Alysha at 11:14 PM