Things have slowed way down here at The Savory Notebook - partly because I have gone back to work, at least temporarily. Searching the classifieds recently, I found that they were opening a temporary holiday kitchen store at our mall, so I figured, what the heck. I worked in retail many moons ago and vowed never to go back, especially now that I have a family, but it's only temporary, right? And we could really use a little extra money, so I applied and was hired. They seem to be willing to work around my schedule which is complicated because of the kiddos. I've been surprised at how unorganized this company has been. I've worked only two days, have received VERY minimal training and I opened and closed the store today. The regional manager left yesterday - after opening on Wednesday (which is also the day we began our training!) and now we are left on our own - all of us new, none of us ever having worked for the company before. Scary!

My husband was in charge today while I was at work and I was very pleased to come home to a nice warm pot of chicken soup simmering on the stove. He doesn't cook often, he does a great job when he does cook. With me working some evenings now, he'll be getting a little more practice. When he makes soup, he rarely uses a recipe, so I don't have one to share, but the soup was delicious - it had crimini mushrooms, parsnip, carrot, celery, white rice, wild rice and barley. It was fun to have an evening of role reversal - me coming through the door after a long day at work to a homecooked meal. Only his was actually ready when I arrived and the kitchen was even clean and orderly - I don't think he is usually quite so lucky. No recipe to share, but I did take a picture..... 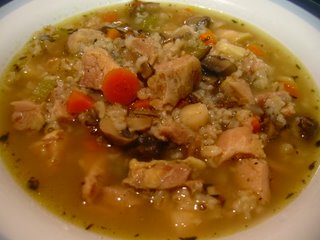 Last but not least, my entry for Sweetnicks' WDB #59. This past Halloween, Bailey got very excited with all the little ghouls and goblins coming to our door and started carrying around one of his favorite toys - a plastic pumpkin trick-or-treat bucket. For some reason, Bailey has always had a fascination with this thing - he loves to bat it around the house and carry it in his mouth. I never have been able to get him to carry it by the handle, like Eli over at Sweetnicks, but it still cracks me up and was especially funny to watch him carrying it on Halloween night. Silly dog. Don't forget to check over at Sweetnicks later on for the rest of the furry gang. 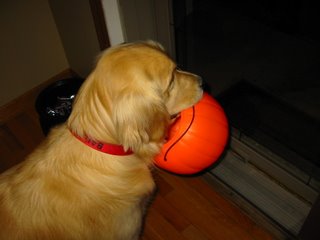 Bailey's on the lookout for trick-or-treaters and
is ready to join in the fun! 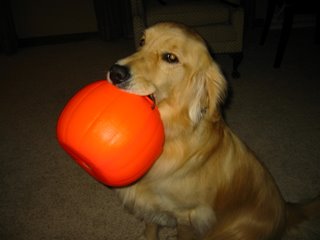 Email ThisBlogThis!Share to TwitterShare to FacebookShare to Pinterest
Labels: WDB